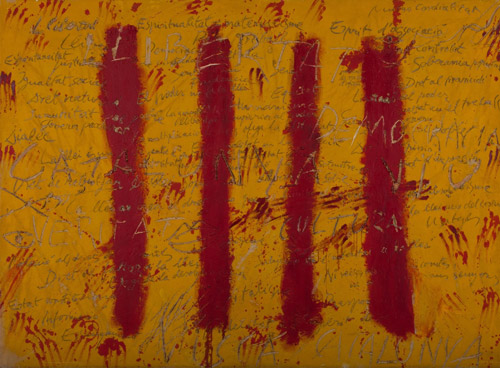 The pictorial work of the Catalan artist, Antoni Tàpies (1923) originates in the historical context of the fifties' Informalism, based on the recreation of the matter under minimal signs of expression, the translation of the artist's vital energy to the painted surface and the idea that textures and shapes can cause an infinite number of emotional effects. In this painting "El Espiritu Catalan", the red-coloured bars on the yellow background shows the artist's political commitment, a cry of deep love for his homeland, revealing the image of a wall as a lacerated space of human wounds of time and a graphic mirror of a thirst for freedom. On a dense background in yellow tones, furrowed by the four blood coloured bars which refer to the epic legend of Wilfredo the Hairy that gave rise to the flag, the artist strongly expresses a whole manifest of hope by means of a graphic art palimpsest that scratches the surface of the painting. Words such as "democracy", "truth", "spirituality", "culture", or "Visca Catalunya" express signs of freedom snatched away during the post-war years due to political reasons. This idea of a wall with incisions has been a recurrent element in Tápies' work: since 1945, my artworks have been related to the graffiti of the streets and with my whole world of repressed, hidden protest, but full of life[1].

For Tàpies, the wall had a very strong evocative power, as he himself expressed on a certain occasion: "They are memories from my adolescence and from my first youth enclosed within the walls where I lived through the wars. All the drama suffered by the adults and all the cruel fantasies of an age which, in the midst of so much catastrophe, seemed to be left to its own devices, were drawn and remained etched around me. All the walls of the city, which due to family tradition seem to be a part of me, were witnesses of all the martyrdoms and all the inhuman hold-ups that were inflicted on our people"[2].

But the wall also offered the painter an evocative and aesthetic sense, based on his deep interest in Eastern philosophy with authors such as Bobidarama, the founder of Zen, whose work is precisely entitled "Wall Contemplation in the Mahayana". The marks, furrows and natural alterations of the raked sand and the stones of the Zen gardens were always admired by Tàpies, who tried to recreate them in his work as essences of nature and of the human spirit. The painter was also interested in the vulgar graffiti, which Brassaï had portrayed with his camera since the thirties.

The large panel of El Espiritu Catalan, measuring 200x 275 cm, is considered to be one of the great masterpieces of Tàpies and, over the years, it has been temporarily ceded to form part of several retrospectives such as the ones held in 1980 in the Spanish Contemporary Arts Museum, in the Serpentine Gallery of London in 1992 or in the anthropological exhibition of MACBA, Museu d'Art Contemporani of Barcelona in 2004. Tàpies carried out very few variations on this topic, highlighting the work Cuatro Barras (Four Bars) (1972), which forms part of the collection of the University Art Museum of Berkeley, California, or the paintings that still remain in a private collection: Inscripciones y Cuatro Barras sobre Arpillera y Pergamino con Cuatro Impresiones de Dedos(Inscriptions and Four Bars on Hessian sack-cloth and Parchment with Four Finger prints), both from 1971. In the first of these, Tàpies transferred the pictorial phenomenon of "El Espiritu Catalan" to a tapestry with the collaboration of the craftsman, Josep Royo, and the other two were created respectively under austere povera aesthetics by means of ropes and on an ancient parchment support.

The Espiritu Catalan represents a symbolic and universal dividing wall but all a paradoxical unit, due to that common sentiment of a historical people, a reflection of hope on the other side, in that other place that is hidden and invisible due to the wall that separates us from what we desire and that once demolished, will save us.