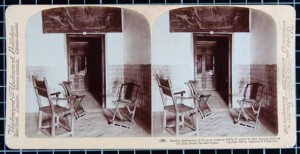 In this image, the chairs seem to have struck up a conversation. The pieces of furniture often adopt human characteristics, which is perhaps not that surprising considering their function. Here, as in many of the other photographs, the light is especially intense and the shadows are sinister. Not knowing where the light comes from makes us think about the existence of another world beyond the photograph frame, in this case, on the inside, after passing through the porch door. The shadow cast by the chair to the right is, in my mind, especially disturbing, like the door that invites us, even challenges us, to enter the building. The chair on the left with its back towards us prevents us from entering the photograph and taking part in the conversation. Not only the chair, the shadow or the door, but there are also other tiny details, though trivial and ordinary, that contribute to the atmosphere of singularity. In fact, they intensify it.