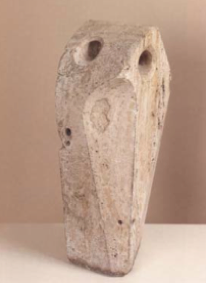 This severe figure shaped in stone as an archaic idol, represents with Solid form and light modules one of the best examples from Jorge Oteiza's first masterful Experimental Period that lasted from 1950 to 1959. The form adopted is that of a totem, also reminiscent of the stone cairns that can be found scattered across the Basque country and that so inspired Oteiza in his work. This piece was no doubt inspired by his passion for the shapes used in pre-Colombian statues that he had studied in South America many years earlier, and the archaeological remains of his homeland, such as cromlechs and other Neolithic sites, as was the whole metaphysical and conceptual programme of his experimental project in the 50s.

The stones with holes of this period from 1954 to 1956 were called light condensers by Oteiza. They were generally comprised of hyperbolic shapes: Spatial units with concave and convex shapes, which, intertwined and vertically superimposed, formed what Margit Rowell has explained as "positive/negative units that expressed permanence and change"[1]. This combination of opposite poles originated from tests with artistic shapes performed in his experimental laboratory on models and from series of scientific theories based on mathematics, geometry and nuclear physics, which the artist mastered.  Thus, his creative process is one of the most successful fusions between science and art that can be found in 20th century plastic arts.

In the specific case of this figure, the upright spindle shape differs, however, from other hyperboloids from those years, which were normally structured into three volumetric units. The front shape of the volume, on each one of the sides, is an inverted trapezium, a geometric shape that was used by the Russian constructivist, Kazimir Malevich, in his suprematist paintings. Oteiza admired this flat geometric model a great deal due to its quality of having four sides where two parallel sides never coincided. This lack of stability of the shape enabled Oteiza to also suggest in his structure the aforementioned conceptual peculiarity both of permanence and of change and a whole "universal generator of intertwined shapes"[1].

On the other hand, the bored holes of different sizes, which throughout the volume of the sculpture seem to illuminate the stone shape from the inside, vivify the mass by means of dematerialisation. The peculiar texture of travertine marble, with its smooth and accidentally cracked surface, reinforces that release of light from the solid block. Oteiza's interest in hollows and empty spaces was not only formal but also spiritual, reducing the natural contours of the stone and perforating its interior in order, in the words of Margit Rowel, "to release the light of the spirit from the inside of the solid block"[2].