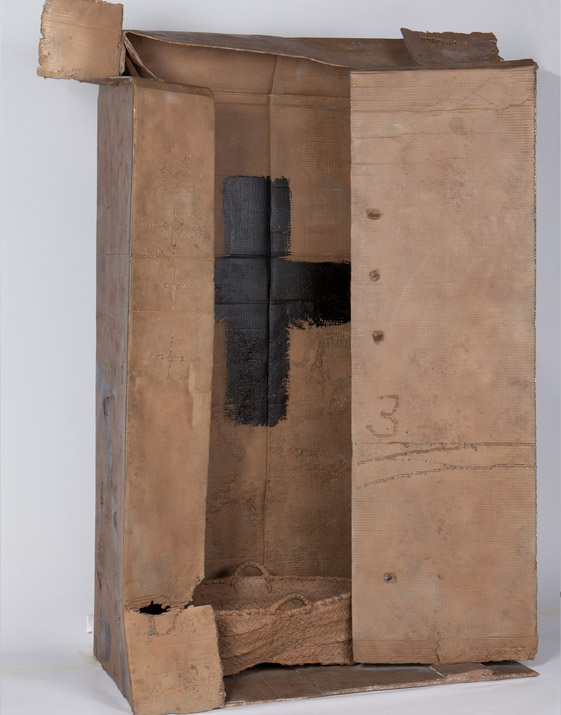 "Composició amb Cistella" is one of Antoni Tàpies' most important sculptures. Finished in 1996, it was produced from a large cardboard box cast in bronze and an example of a renewed "Arte Povera" style, it aesthetically appears to be of little value. Tàpies was the chief exponent of this movement, having pioneered the style in the 1950s within the framework of the so-called Nouveau Realism that was being developed in France and the Italian Arte Povera of the 1960s. This French movement, shaped by the views of the art critic Pierre Restany, brought together artists such as Daniel Spoerri, Arman or César who, like Tàpies, defined new ways of approaching perspectives of reality by renouncing traditional materials. Using industrial waste or that discarded by the consumer society, they gave importance to chance and irony, and freed art from the frontiers established between art and banality.

The first piece by Tàpies that uses real objects, Puerta Metálica y Violín (Metal Door and Violin), dates from 1956 and in this, a steel door or gate serves as a corrugated musical score for an old violin stuck on top of it. After this pioneering work, the informalist materic painting of Tàpies consists of assemblage compositions using such ordinary everyday materials as mattresses, pieces of string, fishing nets, books or shoes. They depict the crudest reality as a further sign of his aesthetic vision, his graphic and metaphorical abstraction, making some of his compositions look like hieroglyphic archaeologies. However, His first cardboard assemblage dates from 1959, representing a simple piece of cardboard wrapped in string and elevated as if it were an idealized icon of the most austere reality.

In the 1996 piece, the objectivity of the material is ambiguous. It is a work of irony which is very typical of the contemporary art of the 1990s: the large cardboard box with the wicker basket inside is, in fact, a heavy lost-wax cast bronze sculpture covered in a golden patina. Whereas in the 1960s, the vulgar object was the fragile protagonist of the work, here this material is appropriated so that it can be disproportionately exalted.