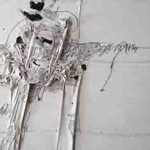 Manolo Millares (1926-1972), artist from the Canary Islands, is considered to be one of the most important informalist artists of the 20th century. From a family of poets and historians, his short but intense work endured as one of the most heartbreaking images of an abstract, but tangible and material view of the disasters of war and abuse of power. He was the founder of the El Paso group in 1957, the first group of Spanish abstract painters, in which each one was different to the others due to a different use of the support and work materials. If Manuel Rivera used the technique of metal meshes, and Feito or Frances used sand, Millares stood out for using hessian or sack cloth as a support for his work, in the wake of his peers, such as the Italian artist Alberto Burri.

This poor material was as wretched as the meaning that he wanted to give to the concept of his work, based on the existentialist recreation of the human being and the poetics of indecency and mortality. These sacks, fastened tightly to the frame, were manipulated, slashed, cut, folded and sewn onto the frame, in one of the most brilliant exercises remembered in the 20th century of techniques associated with the manipulation of the canvas and with the creative possibilities of the support. At the end of the 50s, artists such as Lucio Fontana with his incisions on canvas or Manzoni and his accumulations of china clay and cotton, posed sculptural type problems on the canvas, containing spatial values which, at that time, were known as spatialism. Other artists in Spain, apart from Millares have stood out in this movement, such as Rivera, mentioned above, and his metallic spider webs or the sober wooden reliefs by Lucio Muñoz. Millares' short life meant that he would only carry out about 500 hessian sack cloths between 1954 and the date of his death in 1972.

The development of this singular aesthetic commitment started first with some two-dimensional works where he considered the painting as a wall of signs and symbols, in the style of the Uruguayan Joaquin Torres-Garcia and slightly influenced by the real object collages by Kurt Schwitters. In his first hessian sack-cloths of 1954, the support stopped being a traditional fabric to become a map of darning and tears in three dimensions, which already showed that ambivalent play between the reconstruction of the material and its destruction. All of this was enlightened by a pictorial language that evolved from the black and ochre colours at the beginning to the luminous white colours of his latter period, by means of series such as theAntropofunas, the Hombres Caidos (Fallen Men) or theSarcofagos para un Personaje (Sarcophagus for a Person). In all of his hessian sack-cloths, we can find folding reliefs like the orography of a mound of corpses placed on a dismal wounded stage, which represents the cruelty of violence and the material destiny of existence. Following the black background period, the white shroud backgrounds emerge in the last stage of his life.De este Paraiso belongs to this period, which is ironic in its reference to the idyllic freedom that did not exist in the period when it was painted. In it, we are shown the raised figure of what Millares called homunculus, a grotesque humanoid that appears to be a being with a shroud, similar to those used to envelop the native Guanche mommies that so fascinated Millares in his youth, during his visits to the Canary Museum. In this work, the third dimension of the figured relief expresses a real "Paradise" from the artist's childhood years during the Spanish Civil War and the inhumane effects of the post-war period. The greatness of Millares' art lies in his radical vision of existence, harsh like an X-ray of the human soul, as corrupted as it is beautiful, and chromatically as black and white as life and death.