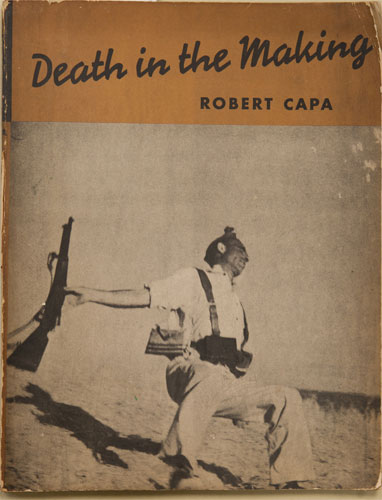 Collection of the Museum University of Navarra

Death in the Making, the first book by Robert Capa, was published in the midst of the Spanish Civil War. Capa was actually the pseudonym used by André Ernö Friedmann and his girlfriend Gerta Pohorylle, better known as Gerda Taro. Both were photographers, and they used to present the images that they sent to newspapers and magazines with the common pseudonym Robert Capa. However, Gerda died in an accident when barely a year had passed from the outbreak of the war and it was André who inherited the Capa persona as his photographic identity, who became a mythical character in the twentieth century photojournalism.

The Spanish war brought together all the circumstances necessary for the development of photojournalism in the modern sense of the term: the existence of lightweight cameras, like the Leica, and the illustrated newspapers that could reproduce a large number of photographs. This made the war of 1936 one of the first conflicts in history that was systematically portrayed and massively reproduced.

Death in the Making could be considered as an extension or a synthesis of the reports that Capa used to publish in magazines (and indeed many of his photographs had been featured earlier in the press). The book is an anthology of images that represents a narrative of the war, not from an objective and abstract point of view but rather, based on personal experiences. Capa, who narrates the text in first person and appears as the author of the images along with Gerda Taro "who spent a year in the Spanish front and stayed there" as he says in the inscription in the book.

Martin Parr and Gerry Badger consider Death in the Making as a "diary" of war. This autobiographical aspect stems from the criteria applied to the chapters, which are not chronological or thematic but rather a mixture of both. It all begins when the photographer arrives in Barcelona on the 5th August, 1936, and continues with different aspects of the war: the birth of the People's Republican Army, the siege of Madrid and Bilbao, the war in Andalusia, the role of Republican Catholics in the Basque country, women in the war … That is a sequence of themes and different places without a clear order, from which an optimistic and somewhat naive view of the conflict emerges. A framework in which the effectiveness of the narrative is more important than the documentation in its strictest sense (e.g., the aforementioned Whelan has shown that the photographs with captions that place them in Malaga were in fact taken in Cerro Muriano).

Death in the Making can be read as a "diary" but also, it is a propaganda book written in the midst of the war. "The worst is over now …" says Capa when talking about the defence of Madrid one year before the end of the conflict. With all the innocence from which this opinion is drawn, Death in the Making is not only an exceptional document on the war in Spain but also, one of Capa's main works. As an author, he never worked with single copies, like artistic photographers, rather he developed the lines of mass and ephemeral consumerism typical of photojournalism, of which this book was a natural extension. The distinctive of this "logic" is the use of the printed media (newspapers, magazines or books), in which the photographs do not work as isolated images but as sequences attached to a text, and produced in collaboration with other authors. In Death in the Making, the collaborators were Covici-Friede, the editor, Jay Allen, a renowned journalist who signed the preface, and the photographer Andre Kertesz, who was responsible for the design.

The copy of the book that is at the Museo Universidad de Navarra is of special interest because it is probably a copy of the editor's work. A handwritten note indicates it was delivered by the author of the preface, Jay Allen, to Covici Friede, the editor, and the precise date, January 25th, 1938 is indicated by a stamp. Unlike the final edition, (hardback and with a large image of a wounded militia covering the dust jacket), it is a softcover edition without a jacket, with a design similar to the final dust jacket.