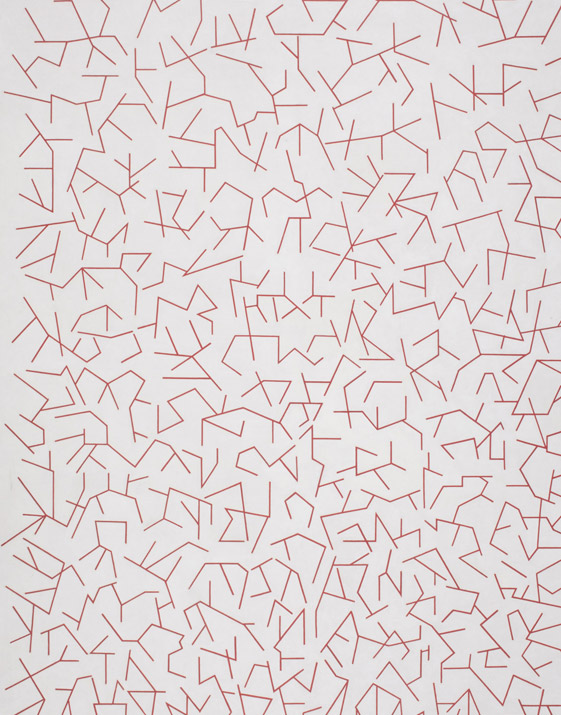 The Numero y las Aguas I is the first of a series of paintings the artist began in 1978 and continued on and off until well into the nineties in different composition structures and colours. Its large white rectangular space houses a shower of geometrical signs by way of digital keys or musical notes that float symmetrically and complement each other with harmony and order. For Palazuelo, as Javier Maderuelo has explained, beauty came from the numbers, as with them, we are able to illustrate our harmonies, proportions, series, combinations and relations[1]. Some years before he finished this painting, in 1976, Palazuelo told an art critic that the number, in his work, was the true formal principle. On another occasion he expressed: "Mathematics are the language of nature, and if that language is not spoken, it will be impossible to appreciate its mysterious beauty"[2]. It was in 1953 when Palazuelo began to take an interest in numerology and occult sciences that he studied in order to apply them to his plastic interests: "All of my works, since 1953, are consciously related to numbers, they originate from them"[3].

Poetic plasticity that springs from the balanced composition of El Numero y Las Aguas I, contrasts with an almost mechanical rigour that transfigures this painting into a mental and musical space, like a score of undecipherable signs or an architectonic plane

There is a document by Palazuelo that refers to this same painting, entitled: El Numero y las Aguas (Musical Score) that should be reproduced in its entirety: "Organic life -our life – has begun amidst water. The image of an unlimited space comes to mind when water is contemplated, a primordial space that unfolds when the unborn number enters into action, converting potential into action.

The number is expressed, then, together with space; the number moves and becomes transformed, and its movement engenders the dimensional configurations that precede any shape. Space thus imagined and designed is a "living space", a fertile matrix of all signs, all rhythms and of all shapes. It is the place of a continuous birth, of all possibilities and differences.

The image drawn is an independent set of signs that has its own internal dynamics, ruled by a global and significant coherence, and which forms a system that owns its own semiology. The work thus drawn and structured is an organism, a "living" configuration, as it potentially has the capacity to admit an external intervention – a manipulation -, which can activate its internal dynamism so that this develops the processes of continuous transformation, its metamorphosis. It is like "experiencing" fertile shapes, as the development of its transformations implies the generation of "lineages" and families of shapes. The system of drawn signs turns into a vehicle and at the same time the appropriate instrument for processing information.

The score of El Numero y las Aguas is a structure, a continuous geometrical drawing conceived as an "open system". This "geometrical body" encompasses a perceptible multiplicity. From the very moment it is captured, this multiplicity suggests the modalities of its transformation, which must be respected by any external intervention. If the manipulation carried out is not in agreement with and is not integrated with the general and consistent dynamism of the structure, it will be impossible to activate therein the different possibilities of its "latent vitality"[4].

The complex internal mechanism of this painting comes from the mark left on Palazuelo by the ideas on transmutation and unification of alchemy of Carl Gustav Jung, much admired by him. By way of a cryptic labyrinth, a limited catalogue or compendium of structures is contemplated in the painting. These structures are classified and associated with each other on the white interior from which they gravitate. The intertwining takes place to a certain extent between the whole and the minimum elements that comprise it, despite the casual nature of its structures. The graphic art or red-coloured cracks are also reminiscent of the structures of gardens of hedges that Palazuelo worked on at his La Peraleda estate, as some photographs from the 60s reveal. A structure that, in the end, is the result of his fascination for the beauty of mathematical and geometrical compositions that numerology inspired in him, and which will be materialised in intertwining steel sculptures like those of the later series, Paisaje (Landscape), of 1996.  Images like that of this painting emerge from this scientific and plastic rigour with a cryptic but very beautiful aspect, where the pretentiousness or grandiloquence of the abstraction of authoring, gesture and footprint disappears, to masterfully leave everything simple and balanced, showing that harmonious order of the absolute hidden within the irregularities of the material existence where we live and think, like perfect music.