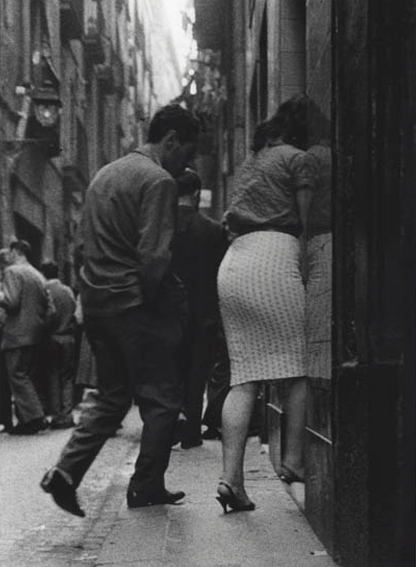 This couple entering an establishment is one of the photographs taken by Joan Colom in Barcelona's Chinatown. Colom began his project in 1958 and  its aim was to systematically photograph a marginalised neighbourhood, following a peculiar work method.  This method consisted in taking photos with a hidden camera, so the people portrayed were not aware that they were being photographed, and Colom himself also took the photos without looking into the viewer. That is why these are exceptionally spontaneous images and lack pose.

Colom described his work as an attempt to "Discover a neighbourhood, an environment, with a respectfully loyal spirit": The series was presented to the public for the first time in the Aixelà room of Barcelona in 1961, at an exhibition that would later travel to many other places.  It was published in many magazines of the time, and he would thus become one of the most talked about photographers of the time.

But the series would become more famous when the Lumen publishing house published it in the "Word and Image" collection, dedicated to projects in which writers and photographers collaborated. In the case of Colom, the photographs were presented to Camilo Jose Cela, and the writer decided to work on the ones that dealt directly with the problem of prostitution. Based on this selection, Cela wrote a series of ironic and cruel tales, inventing the history of the people who appeared in the images. The resulting book, with the strange title, "Izas, rabizas y colipoterras" (no English equivalent), is the first great publishing success of "Word and Image", which had previously published books by other writers (Miguel Delibes or Ignacio Aldecoa) and photographers (Ramon Mastas or Oriol Mapons).

This photograph, a copy of which is preserved by the University of Navarre Museum, appears at the beginning of Izas, rabizas y colipoterras, together with the introduction to the underground world of Chinatown. The copy of the photograph appears next to a famous verse where Sister Juana Ines de la Cruz asks: "¿O cuál es de más culpar / aunque cualquiera mal haga: / la que peca por la paga / o el que paga por pecar?" (who is more to blame, although both do wrong: the one who sins and gets paid or the one who pays for the sin to be carried out). In this line, Cela assures that his pretension is to address this issue in "a moralising and violent manner", which in the last chapter acquires a strong aspect of Baroque vanitas. It is a harsh topic, as is the way it is addressed. That is why Francisco Umbral defined Izas, rabizas y colipoterras as the "ecstasy of the absurd of Solana y Valle".

However, it is a delicate topic due to several reasons. Firstly, Colom would complain that the book was more Cela's work than his own. "Cela only chose part of my work for his book". And it is true: Colom's series is more extensive, and Cela's selection is limited to an exclusive topic. On the other hand, and strictly related to the photographs, these pictures were taken without the consent of the models, and this also generated problems. More specifically, a copy of the book fell into the hands of one of the women portrayed who, when she saw it, decided to demand writer, photographer, printer and publishers. Cela had to appear in Court and he declared that he had no idea if the photographs in question referred specifically to that woman, who he had never met, and the matter went no further. Colom, on the other hand, was forced to give some doubtful explanations about his relationship with the people portrayed.  Affected by this experience, after that, he abandoned photography. The publication of the photographs in the form of a book would, thus, be the launch pad to fame and also the end of Colom's career as a photographer.