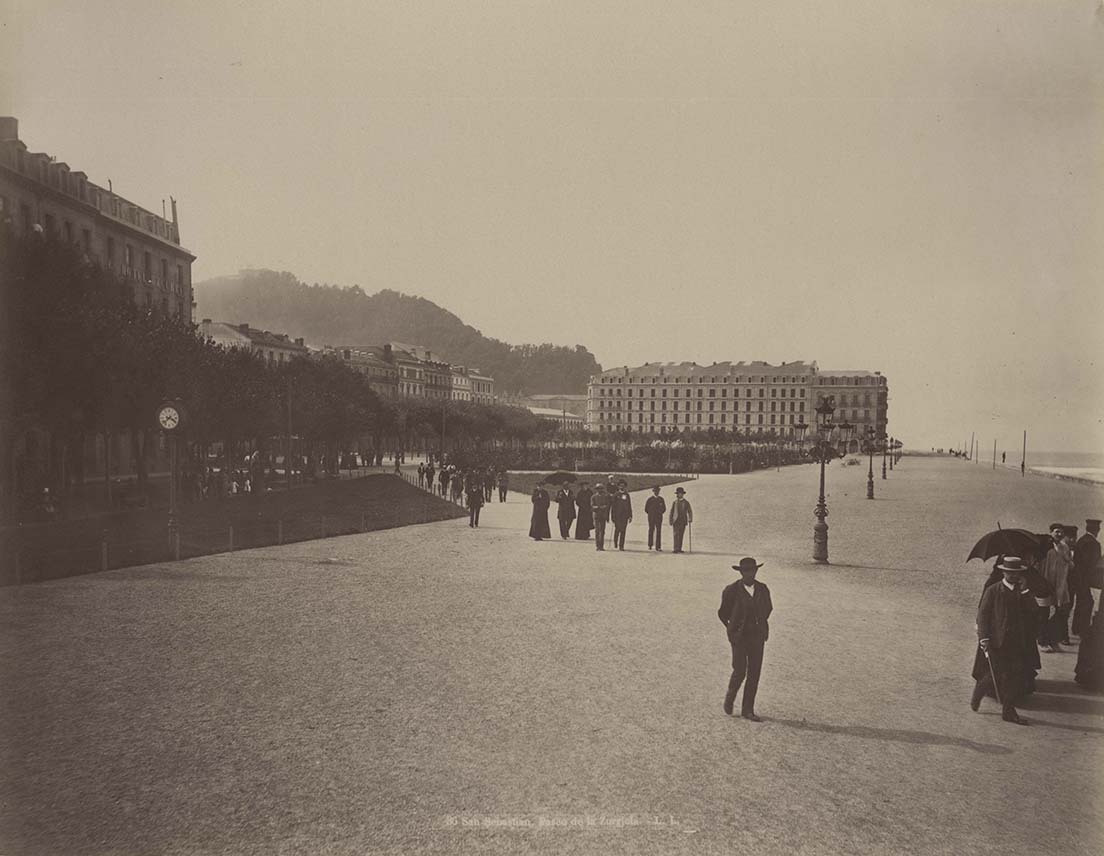 Playa de baños (Bathing beach) is a photograph taken by the French photographer, Luciane Levy, who, in 1888, travelled round Spain, Portugal and Morocco to swell the archive collection of the firm, Leon & Levy. The image shows the San Sebastian La Concha bay with the island of Santa Clara in the background and a group of bathers in the foreground. A boy, to the right of the foreground and several couples are wading into the water. All of them are wearing full-body bathing costumes.

Really, the reason for this photograph was something totally new at that time: The bathing costume, almost identical for men and women, was a novelty, just as bathing in the sea was. The conviction that the so-called "sea bathing" could be therapeutic generated an increasing influx of people to coastal towns throughout the 19th century. This would later derive in summer tourism: first of all, to the towns in the north and only later on to the Mediterranean. And San Sebastian would undoubtedly be the most important spa resort town in Spain at the turn of the century.

"During the months of July and August, this is a seaside Madrid", wrote Benito Perez Galdos in 1886. The actual city was designed to accommodate visitors following the demolition of its walls and the "ensanche" (expansion) of Antonio Cortazar. San Sebastian already had a railway station in 1864, which facilitated the arrival of visitors. Very soon these would be illustrious visitors: In 1889, the Queen Regent, Maria Cristina, ordered the Miramar Palace to be built and converted the capital of Guipuzcoa into the summer seat of the Court. From then on, there were an increasing number of attractions in the city: The Gran Casino was opened in 1887, in 1910 the tennis courts, in 1922 the new Kursaal…

A summer holiday capital for the nobility and the middle class, the beach would, to a certain extent, become a meeting place: "a place where rich and poor, aristocrats, politicians and middle-class people went and rubbed shoulders with each other every day", E. Flagey wrote in 1898. And this can be seen in Luciane Levy's photograph, where all the characters are evened out by the democratic and then modern bathing costume.

The Playa de baños photograph really belongs to an album about the city made by Levy, in which many aspects can be seen: Panoramic views, the new palaces, the recently inaugurated Gran Casino, the historic architecture… and some images of Pasajes, a fishing village very near to San Sebastian, known for its illustrious history: Lafayette embarked there for the American War of Independence and Victor Hugo stayed there during his trip to Spain in 1843.

The San Sebastian album is not really a tourist guide, because it does not deal just with monuments and emblematic places, but also with the life of the city, which appears full of middle-class people strolling along the seafront promenade protected by sunshades… And of bathers, who wade into the water without the help of the rolling huts that can be seen in some of his pictures, which would be used to take the water to the members of the aristocracy. A spectacular Beach Hut was built in La Concha in 1894, which travelled along rails thanks to a steam engine designed to be used by the young Alfonso XIII. Despite what Flagey said, outside the water there were still some distinguishing signs.

Painting beaches is an important topic at the end of the 19th century for artists such as Eugène Boudin, one of Claude Monet's masters, who also liked these topics… Or, in Spain, Dario de Regoyos, who often visited San Sebastian and later on, Joaquin Sorolla. A line that would lead to the inclusion of the beach as a groundbreaking setting in Darius Milhaud's ballet, Le train bleu, performed for the first time by the Diaghilev's Russian ballet in 1924, for which Picasso would paint an enormous couple of bathers as the backcloth. In this case, the typical 19th century bathing costumes were replaced by a kind of white tunic, more timeless.

If using a setting like that for a ballet was groundbreaking in the 1920s, that was because, by that time, the beach had become a popular, democratic and prosaic place: Magazines were already full of art deco style illustrations, full of modern women with garcon haircuts, and with beach and sporting themes. Luciane Levy's San Sebastian album is a document of this process of intense social changes that had occurred in a very short period of time.