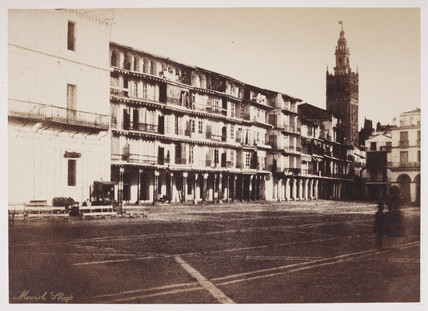 Claudius Galen Wheelhousewas born in Yorkshire, England in 1826 and he began to study medicine at the School of Leeds in 1846. He was already a member of the Royal School of Surgeons in March 1849. Nobody knows who taught photography to this author. At the end of his life, and in a philanthropy manner, he founded several hospitals in Leeds, England, whilst he was President of the British Medical Association. In September 1849 he had embarked on a pleasure trip onboard the ship, Gitana, which belonged to Henry Pelham Clinton, Duke of Newcastle, an English aristocrat who would later also play an important role in the history of photography as a result of authorising, as British Minister of War, Roger Fenton to cover the campaign in Crimea. Wheelhouse would be the first to take photographs on paper on Spanish soil, one in Cadiz and three in Seville, all of them in October 1849. After taking the photograph of Cadiz he was arrested, as he narrated:

To obtain it, I entered the fortifications without realising it and when I was celebrating my success an officer and a dozen soldiers surrounded me and arrested me believing that I was a spy making a map of the fortifications. We went to the military prison. Meanwhile, members of the crew, who had accompanied me, went to tell Lord Lincoln who got in contact with the English consul. He (the English consul) came and he had never heard about photography, but he gave a great explanation saying that I was a doctor on board a ship and that I was carrying out a recently discovered method to obtain images with the aid of sunlight. After long deliberations I was released after being held for 12 hours.

Wheelhouse's trip took him all over the Mediterranean, stopping off in Portugal, Spain, Malta, Greece, Egypt, Palestine and Syria. Wheelhouse took photographs in all these places. He was the second British photographer to take photographs of these territories following the Reverend George Bridges. By chance, they both met in the port of Valeta in Malta where they exchanged ideas and experiences.

The photographs were compiled in an album, Photographic Sketches from the Shores of the Mediterranean, of which only one copy is preserved at Bradford Museum and very few single images, one of which we are lucky to have at the Museum University of Navarre..

The image is still in a magnificent state of preservation and if we observe the original in detail, we can see the brush marks made by the author on the edges of the paper to sensitise it to light.

Market Square and the Moorish street by Wheelhouse, apart from belonging to the group of first photographs on paper (callotypes), taken on Spanish soil, stands out because it is an image where the highlights contrast with the blurred silhouettes on the right-hand side of the image, producing and unreal and oneiric sensation that the Daguerreotype procedure did not achieve.