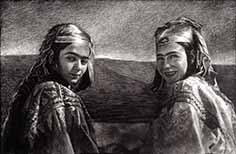 José Ortiz Echagüe (1886-1980) was an engineer and entrepreneur, but he was also one of the greatest representatives of the history of photography in Spain. He began taking photographs as a young man whilst he was studying at the Academy of Engineers in Guadalajara, from where he graduated in 1909. That same year he moved to the Rif, in the area of Melilla, where he carried out three stages as a member of the Spanish Army sent to pacify that area. Shortly after his return to Spain, he left the army to work full-time on founding Construcciones Aeronáuticas S.A. the company that he managed since 1923. From then on, Ortiz Echagüe was known as a photographer due to his great series of Spanish themes, which saw the light as a book for the first time inSpanische Köpfe, published in Berlin in 1929 and translated into Spanish as Tipos y trajes de España (Types and costumes of Spain). These would later on be followed by España:.Castillos y alcázares (Spain: Castles and palaces) (1939), España mística (Mystic Spain) (1943) and España. Pueblos y paisajes (Spain: Villages and landscape) (1956).

Moras de Tetuan is a good example of the formal and technical experimentation that Ortiz Echagüe carried out in the works of his youth. This is third double portrait of two girls from Tetouan, which reflects the photographer's interest in capturing the characters with their typical dress, situated in their normal surroundings, in this case with the mountains in the background. What draws the attention most about this picture is that this background has been deeply altered: everything appears to have been scratched, to show the white colour of the photographic paper. In fact, there are several versions of this same photograph, with different variations to the background, which, depending on the cases, appears to have been touched up more or less by the author.

Ortiz Echagüe always insisted on the documentary value of his work. But, at the same time, and above all during this earlier stage, he worked intensely on the compositions of the textures of his images. In this sense, he was in complete harmony with the movement of the world artistic photography. For example, with the authors who published around the same time in magazines such as the New York Camera Work, like Frank Eugene, who, in the April 1910 edition of this magazine, published a Horse picture whose background would be highly scratched and that would be highly criticised due to its scarce "photographic" aspect. Eugene responded to this criticism ensuring that this only affected the "background" of the image, whilst the "figure" continued being a perfectly documentary photograph. Something similar occurred with the image of Ortiz Echagüe, who used similar arguments; "If (my work) often require considerable touching-up work", he wrote, "this is done with total respect to the photographic background".

Moras de Tetuan purported to be the portrait of some girls from the Rifa area, as well as a meticulous careful image where the composition or the textures are just as important as the documented reality. However, not all the versions of this photograph were the same, and when Ortiz Echagüe had to select some of his African photographs for the "African" section of Spain in his book Tipos y trajes, he did not choose the most manipulated versions, but rather those that had greater respect for the photographic nature of its mountainous "background". Thus, Ortiz Echagüe himself ruled out some of the more interventionist options that he managed in his youth, to adapt to the "canon" of his more mature works.

A photograph such as the Moras de Tetuan thus reflects the discussion on how to understand photography that covers the entire work of this author.