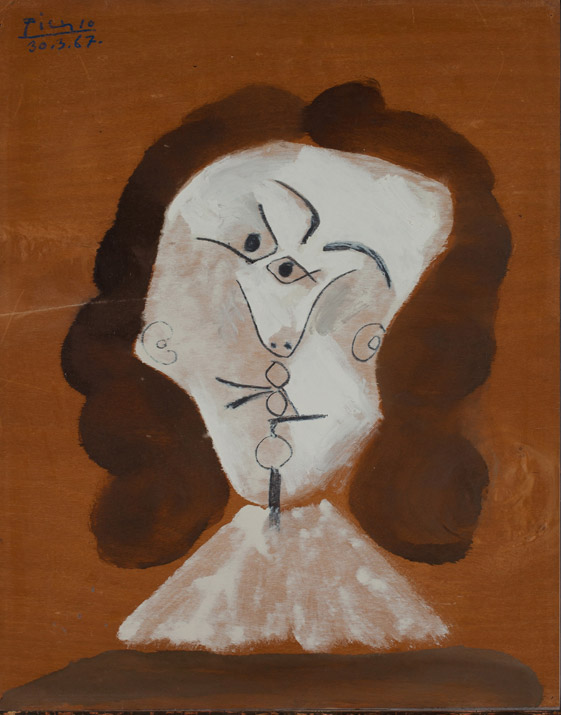 Picasso asked to be buried in his Spanish cape. The request made in his will was complied with by a Republican from Madrid, a barber, with whom Picasso used to go to see bulls die in Antibes and who he named as his executor. It was a symbolic act – the last one, before the curtain finally came down at the end of the tragedy, or the comedy, of his life.

He was really fond of that character, the classical Spanish gentleman, who had been portrayed by El Greco with one hand on his chest or attending the duel by the Count of Orgaz. In one of his first self-portraits (1898, Picasso Museum of Barcelona), he was characterised as one of those noblemen from Toledo, with a goatee and a gaze somewhere between glassy and spiritual. Which was an eccentricity for that time, when Domenikos Theotocopoulus was expelled from the Olympus of the great national painters (Velazquez, Murilla, El Españoleto). But Picasso liked to set himself aside from conventions. He always did that: in France, he acted like a Spaniard who like bullfighting and painted characters with ruffs; and in Spain, he made it clear that he was right up there with the great representatives of the French genius.

The first Spanish work that Picasso wanted to make a version of was the one that Theotocopoulus made of his son, Jorge Manuel, portraying him as an engorged gentleman, palette in hand (Fine Arts Museum of Seville). Even Sabartes, who was a real native of Barcelona, and with whom the painter reached a consensus, in Catalan, on the price of his fabrics, when the comparator was nearby, was also portrayed with his ruffs and his good metal rimmed glasses adapted to his nose (Picasso Museum of Barcelona). The black colour of the elegant garments and capes of the Spanish emperors and nobles, the black colour of the cape with which Picasso was buried contrasts greatly with the paleness of the noble faces and the faces of the dead, with the white of the large ruffs, à la mode in the Habsburg court. The Grandes of Spanish Baroque have obtained important plastic results from that contrast in colour and shape provided by the ruffs and Picasso did the same when everybody considered him to be an unquestionable Frenchpainter.

And this is what he did, too, in the portrait of a gentleman from our collection (Tête, 1967). This is one of those Spanish figures, who appeared more and more frequently in the canvases of his last period. Gentlemen, either drawn or painted, with or without a sword; slim gentlemen or dwarfs, smokers or in love; gentlemen in brothels, or taking a siesta in a leafy grove, in the open countryside; gentlemen dressed in black and animated with bright colours: There were a lot of gentlemen in the painter's final years, before his executor piously enveloped him in his black cape.

The one from our collection is one of the most sober representations of that chivalry. As in other figures of that same period, Picasso brutally flattened the volumetric elements of the face. Everything is there: the eyes and the eyebrows, the ears, the moustache and the fly under the lips, the ruff. But the elements that configure the shape of the head, surrounded by luxurious manes of hair, are clearly flat and front-on; whilst the elements that should have been seen from the front and aligned in that perspective – eyes, eyebrows, lips – form a profile that is, furthermore, bifocal. There is, however, a central axis of gravity, where those elements are going to converge and where they are all anchored, to support the bust, like a skilful acrobat, in a balancing act.

One important detail is that the figure has been painted on a wooden panel. This is something that Picasso had done before in his version of El Greco's son, portrayed as a painter. Then, he had a "naturalist" reason for doing this, as the shape corresponding to the palette would not only be seen in wood "colour, but it really would be made of wood. In our portrait, the wood provides the illustration with more flatness, more so than if the surface were made of fabric; and so much dark also contributes to the global impression of austerity of the portrait. This Spanish gentleman has something of an ascetic, of Zurbaran style. Perhaps that is why Maria Josefa liked it. And it is impossible for Picasso not to look upon his end, which was nigh, with sadness, from time to time. And that is why he painted characters such as this, at the same time as he hastened to work with faster and more effective gestures, that allowed him to be surprised by the Parcae, palette in hand

Our gentleman, although a figure with dislocated features, is, on the whole, balanced and serene. Like the ancient pharaohs or Roman emperors, Picasso could have chosen for it to accompany him during his last journey. And if he did not do so, maybe it was because his barber from Madrid forgot to wrap it in a Spanish cape, which would have kept him warm in his long journey through the moist soil.