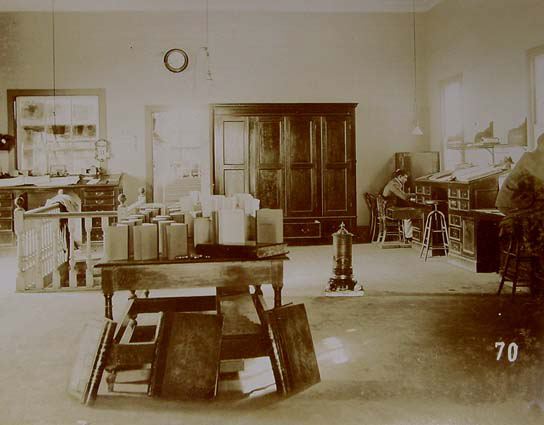 It is not difficult to understand why the surrealists were interested in Eugène Atget's photographs. If they had lived in the 19th century they would probably have been interested in Spanish photography for the same reasons. Something they liked about Atget's work was that, from his vision of surrealism, he connected better with ordinary and daily things than with rare and exotic things. This is what I believe would have fascinated him about this photograph: there can be nothing more direct or more inexpressive or less deceptive than the way in which the theme is presented in it. The photograph is taken from eye height, at a neutral distance, as if the photographer had made a special effort to be invisible and not interfere with what was happening. However, everything is strange: The position of the objects, the space between them and the actual objects. The people that appear in the photograph are of secondary importance. The figure on the right is blurry due to the prolonged exposure, and the seated, immobile figure at the back is no more than an inanimate object. As occurs with many photographs (now and then), the nature and quality of the light emphasise the singularity. The sunlight is like a spotlight. It is difficult to know exactly where it comes from and why it is so blinding. And, what is that strange object on the floor, on the mid-right of the image?  It looks as if it is about to take off. Even the pieces of wood piled up in any old way on the table on the mid-left could have a secret reason for being there. They all contribute to what appears to be a deliberately obsessive, but illogical order.