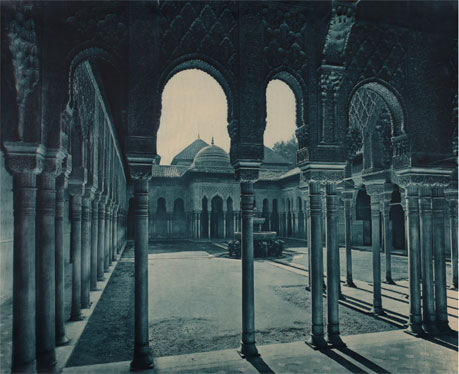 Adolphe Braun (1812-1877) was one of the most prominent French photographers of the second half of the 19th century. He worked as a decorator at a textile mill in Alsace and his love of photography led him in the 50s to compile images of flowers that he could use as a model for the patterns of the fabrics he designed. In the middle of that decade, he opened a studio in Alsace where, apart from housing his photographs of flowers, he carried out different views of Alsace landscape and of the surrounding regions, an example of which are some stereoscopic views of the glaziers of the Alps, which also form part of the collections of the Museum University of Navarre.  In 1857 he founded the company Braun & Co., in which he involved, among others, his son Gaston (1845-1928), who travelled around Europe carrying out stereoscopic views and large-format reproductions of artworks and urban landscapes that would later be sold by his father's company. Such was his fame and prestige that he opened a branch in Paris in 1870 and from then on artistic reproductionsbecame one of the specialities of the house  On the death of Adolphe, it was Gaston who inherited and continued with the company, which, in 1889 changed its name to Braun, Clement & Cie., continuing as an art publishing house until 1968.

In 1886, Braun & Cie., underwent a turning point, when Adolphe purchased for France and Belgium the rights of use of the carbon procedure patented by Sir Joseph Wilson Swan (1828-1914) in 1864, a technique that provided high quality and very stable photographic reproductions. The Swan carbon improved the carbon technique of Louis Alphonse Poitevin (1819-1882) using tissue paper as the weft, which blended the pigment range. The carbon procedure consisted in using an emulsion on the paper, comprised of a mixture of potassium dichromate, pulverised vegetable carbon pigments and gelatine.  The colour of the final image depended on the pigment used. Thanks to the use of that tissue paper impregnated with dichromate gelatine between the negative and the developing paper, used by Swan,the final works would acquire a rich range of tones and hues, even in the darkest areas.

And the richness of the hues can be seen in Alhambra. Patio de los Leones, (Alhambra. Courtyard of the Lions), an image based on a strong back light where the courtyard is defined thanks to a beautiful play of light and shade.  The latter construct and model the surrounding architecture, very clearly tracing both the latter and the different hues of the ornamental Mozarabic motifs situated in the shadows of the gallery. It is also possible to see the relief, contrasting that luminous vitality with the bluish darkness of the architecture that surrounds it. This gives the piece an air of mystery and unusual beauty.

And this contrast of light and shade is also highlighted by theunusual perspective of the shot, as it focuses on the overview of the courtyard, rather than on the traditional view of the fountain of the lions in the centre, which it is famous for. Thus, it looks out from the shadows of one of the surrounding galleries, and the photographer captures its columns close-up, breaking away from the normal frontal takes. Instead, he offers us the architectonic view of the courtyard as if we were looking through windows. And this is offered to us majestically, leaving the fountain in the centre in a second plane (Fountain of the Lions, a primordial piece of the Granada Alhambra). The fountain appears subordinate to the architecture that surrounds it, highlighting the orientalist dome of the central shrine, which becomes a vanishing point of the image. This dome was eliminated during a reform carried out by Torres Balbas in the second decade of the 20th century.

In short, an extraordinary and unique work, both due to theintense blue colour presented, and due to its size, 63.5 x 77.5 cm., which had to be printed from a glass negative of the same size, as on the date of its execution, around 1880, the method for making enlargements had still not been discovered. And that however, and despite the exclusive nature of the piece, it has its parallel in the collection in the red carbon of the same size that illustrates the courtyard of the Doncellas del Alcazar in Seville.