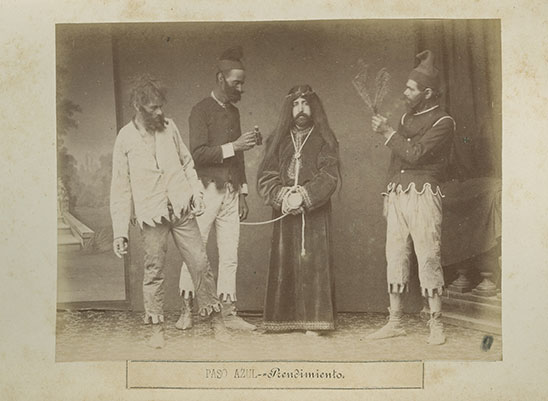 In 1884, the photographer Jose Rodrigo returned to Lorca after having spent a few years working in Almeria and other places of the mining area of Levante. From that time on and until his death in 1916, he continued to live in the town where he was born, where he had a photographic studio with an extensive production, mainly of portraits.

The Museum University of Navarre owns an album that is an example of Rodrigo's work as a studio photographer: It is a series of thirty-four albumins that show the characters of the Easter week processions in Lorca. The series does not purport to be a complete journey through the celebrations and characters, but rather an album of loose sheets, in which the purchaser could include the selection of images that interested him. The photographs come from the repertoire that Rodrigo had been collecting since the 60s of the 19th century and which he would continue to work on in the following years.

The peculiarity of the Easter Week pictures taken by Rodrigo is that they were taken in their entirety inside the studio. They are not documentary images about the passage of the processions through the streets of the city, but portraits, whose characters pose in their costumes at the photographer's studio. This is in line with the characteristics of studios at that time: An artificial setting, with a carpet with geometric shapes and neutral background. In some cases, he includes accessories such as curtains or classic balustrades, which are made of ephemeral materials and are placed as decorative elements on the carpet. Inside the album there is a photograph where four characters represent the capture of Christ.  On the right-hand side of this photograph, it is possible to see the balustrade with the curtains and, on the left, a fragment of a painted scenery backdrop, which had probably been left there from some previous session.

None of these inconsistencies seem to matter very much. Rodrigo applies the same setting to all his characters, who pass before his camera dressed as the characters they represent during the Easter week. A repertoire which, in Lorca, is especially rich: It is not limited to the regular Passion scenes found in other places, but it shows a whole journey through the biblical history, from the old Testament -represented in groups such as the feast of Balthazar, of Deborah or of Nebuchadnezzar – until the Apocalypse, extensively represented in this album, which starts, in fact, with the figure of the Eternal Father, posing with a solemn gesture in the photographer's studio.

Rodrigo's photographs will achieve some diffusion. Some of the ones belonging to this album were reproduced in an article of 1891 that appeared in La Ilustración Hispano-Americana,where the "true grandiosity" of the Easter week in Lorca is exalted. At that time the necessary technology to directly reproduce photographs in press did not exist, so for them to appear, the photographs had to be engraved by hand.  And thus they were published, reduced to their essential components –the characters- and without the background elements.

The Rodrigo series is also a document about the celebration of Easter week at the end of the 19th century as well as a gallery of portraits of the inhabitants of Lorca at that time. Hence, it is an ambivalent series: in many cases the portraits are of humble people, dressed up, who pose in a very strange manner in an artificial setting. Some curious and somewhat naive images result from this, and this is probably what explains the attraction offered by this series of pictures.