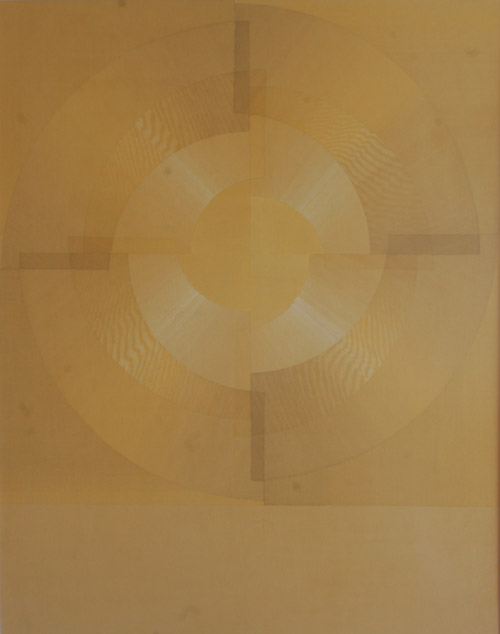 Eusebio Sempere (1923-1985), is one of the most outstanding artists of Optical Art or OpArt in Spain, who bases the composition of his works on optical illusions, achieved by using geometrical lines and colour. In Paris, Sempere established a friendship with Jean Arp, Jesús Rafael Soto, Yaacov Agam, Jean Arp or Víctor Vasarely, and in 1955 he was invited to take part in the group of the Denise René gallery as well as in theRealités Nouvelles exhibition. In the latter, apart from participating with two mobile luminous reliefs, where he tried to incorporate and develop the problems of light within the plastic of that era, he also distributed the manifest on the use of light on plastic, which he himself had drafted. In 1960, and at the biennial of Venice, he attained international success as well as recognition of the importance of his contribution to Spanish contemporary art.

In this gouache, Illuminated superimposed circle segments, Sempere organises the composition around the lines that form geometrical elements that are repeated and superimposed – in this case, parallel circles – which are not mere empty circumferences but rather, on the inside, they house segments of circles in concentric position. And this spatial compartmentalisation is the result of the luminous counterpoints achieved by the chromatic resource, which introduces movement and is structured based on gold, yellow, orange, ochre and white colours, as with Sempere, his experience has always led to the expressiveness that the line was able to communicate to the colour, rather than to the pure geometry of the line. Colour is not taken as a mere optical vehicle, but as a lyrical creator of space, modulated by the lines that transform it, which generate the shapes, and at its intersection, the actual space. Thus, here is a continuous colour line dialogue, a dialectical relationship that can form the essence of the art of Eusebio Sempere [1]. In the gouaches executed by this artist, we see how he applies colour by a grid of fine lines of different chromatism, where we can clearly see the application of different laws on visual reading, where the application of the line, placed from left to right, and bottom-up, produces, when blended together, different light, shiny or opaque effects, which grants plasticity and movement to the work, based on different vibrations. As Popovici points out, Sempere's gouaches are subject to a reticular graph of maximum fineness and sensitivity…

The reticular structure, due to the repetition of the linear sign and its topical arrangement, produces stimuli that are perceived as tensions, vibrations, and above all, as a certain instability of the image, which forms, precisely the illusion of movement. It is as if the same image were superimposed on the real image but in an unreal, ghostly, evanescent manner. That moiré effect –achieved by the drawing –surpasses the merely perceptive field, and has an intimate repercussion as an act of emotional conscience and thus the work seems to express a language to us [2]. Thus, this grid creates a luminous spatiality based on its optical counterpoints, forming one of the bases of the dynamic equilibrium of the composition, which produces that feeling of movement. But, in his gouaches, Sempere moves away from the geometric coldness that characterises OpArt, as the repetition of the line, together with the great mastery of colour that he shows, is going to make the light vibrate in his works, providing them with depth. Thus, from his very first pieces, Sempere is going to use the circle as a fundamental and supporting element for his creations, using, in the beginning, pure colours, with black defining the contours, reminding us of the works of Kandinsky, Mondrian or Klee. And  this initiation in abstraction will give way from 1953 onwards  to the gouaches,  in the beginning on a black background, always with the circle as an element that structures the composition,  but which now begins to break up, giving way to new shapes, but always  evolving around this figure,  which is repeated in a clear order.  And together with the fragmentation of the geometric figures, chromatic richness becomes important, creating colour contrasts, but highlighting the geometric configuration of the work.