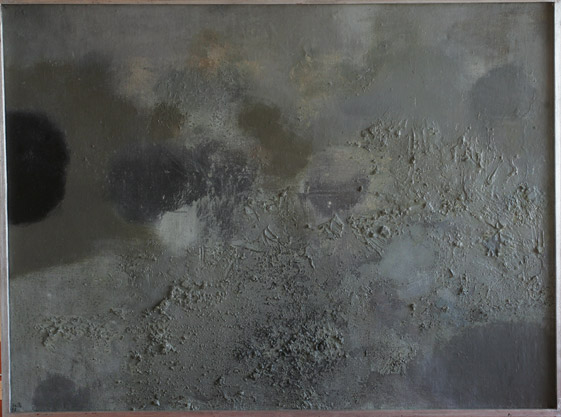 Oil and sand on canvas

The abstract painting of Luis Feito (Madrid 1929) emerges in the fifties as a logical reaction to the academic rigour imposed by the San Fernando Academy of Fine Arts, where the artist was educated. However, he started to paint in the ‘informalist' style in 1952, two years before he was appointed drawing teacher of this institution in 1954. He insisted on creating something new, with a series of interweaving linear works that zigzagged among backgrounds of bronze coloured pasted objects. This aesthetic intention led him, in 1957, to join the El Paso group, the first Spanish abstract movement, together with artists such as Manolo Millares, Antonio Saura or Rafael Canogar. He differed from the latter with his personalised painting style using material compositions with expressionist resonances and evoking the Eastern style, in the line of the gloomy abstraction of ZaoWou-Ki or of the lyrism of Georges Mathieu. The white and black colours, and their entire range of greys, were protagonists of the genuine chromatism of his first decade of work in the fifties.

During that period, the unconscious automatism of an inner conflict was the creative force behind his language, as the artist himself confessed: "I have experienced a situation of permanent inner conflict, of tension, heaven and hell, light and darkness, black and white. For me, that is life. My work is a consequence of those internal tensions" . These tensions are reflected in his paintings by way of deserts of material, enlightened by lights and shades, and gestures of pain and hope. In his working method, Feito attacked the canvas in one single session, with no preconceived or reflexive plan: "In my work, there is never premeditation, as when the shapes begin to assemble, to organise themselves in a closed order, as a kind of protection (…) It is similar to the Eastern way where the centre is the stomach and it comes out through the arm. The head, the intellect, does not intervene in any way. The ideal is for that act not to be mediatised by your culture, by your training. In the era of materials, I acted in a manner similar to that eastern way. If I worked on the ground, I did not do so due to a technical problem, but because in that way, in the painting, you are not tempted to compose, you really do not see the shape that you are making, there is no premeditation (…) everything arose in an intuitive manner" . From that creative perspective, released from the pressure of reflection and based both on impulse and on contemplation, Feito produced a whole ensemble in ranges of greys with random luminous points of lighter colours, letting the nature of the painting impose its own rules, like the volcanic forces of his magma painting, emerging from within itself with the energetic nature of a living being. Feito has always been a composer of the painting, an interpreter who performed the notes of intermediation between the actual energies of his painting and the contemplation of the randomness of its nature.