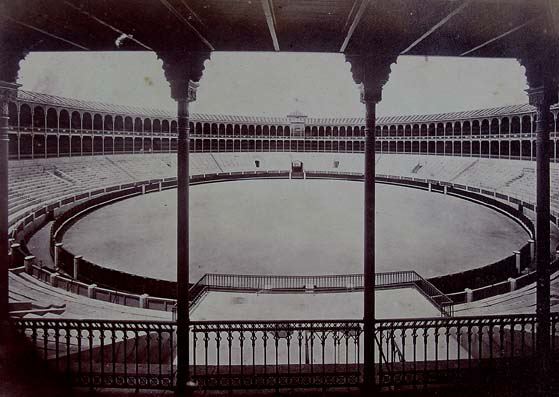 This photograph, like all the others from the collection, was taken, as far as I know, with a plate camera like mine, although in my case, it is by choice and not out of necessity. It is not incidental that this tool of the trade allows (even demands) the photographer to pay special attention to detail and make the necessary adjustments. Everything is scrupulously framed in this photograph: the columns of the square are clearly parallel and the open spaces between them have been meticulously retouched. Care has been taken with the focus and opening of the lens so that the ring, at the far end, is just as clear as the handrail in the foreground. Although it is not very likely that 19thcentury photographers thought a great deal about formal, concrete strategies when constructing their photographs, I am convinced that these first photographs attract us due to the power of the formal resources on which they are based and not due to their importance as historical documents. As an artist, the documentation of a specific historical theme is less interesting to me than the other things that occur in the image.